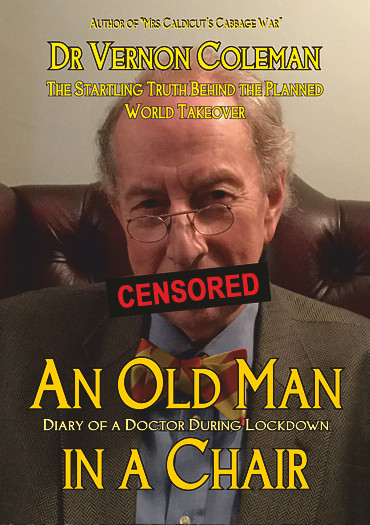 Old Man in a Chair, Diary of a Doctor in Lockdown by Vernon Coleman and published by Classics Publishing.

Dr Vernon Coleman MB ChB DSc FRSA (author of Mrs Caldicot's Cabbage War) was one of the first qualified medical practitioners to question the significance of the ‘crisis’ with which you may be familiar, telling readers of his website www.vernoncoleman.com at the end of February that he felt that the team advising the Government had been unduly pessimistic and had exaggerated the danger of the bug.

At the beginning of March, he explained how and why the mortality figures had been distorted. And on March 14th he warned that the Government’s policies would result in far more deaths than the disease itself. In a YouTube video recorded on 18th March, he explained his fear that the Government would use the ‘crisis’ to oppress the elderly and to introduce compulsory vaccination. And he revealed that the infection had been downgraded on March 19th when the public health bodies in the UK and the Advisory Committee on Dangerous Pathogens decided that the ‘crisis’ infection should no longer be classified as a ‘high consequence infectious disease’. Just days after the significance of the infection had been officially downgraded, the Government published an Emergency Bill which gave the police extraordinary new powers and put millions of people under house arrest.

Dr Coleman, a former GP principal, is a Sunday Times bestselling author. His books have sold over two million copies in the UK, been translated into 25 languages and sold all around the world. He has given evidence to the House of Commons and the House of Lords, and his campaigning has changed Government policy.

Email to a Friend

Withhold not Correction - out of stock

What the Bible Says About Parenting